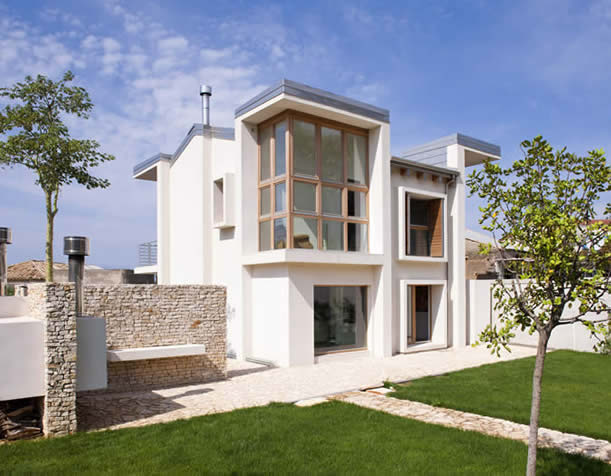 The building was born from a substantial renewal of an old project which is approved previously by another architect. In compliance with the mandate I have decided to introduce quantitative and qualitative changes, first of all, energy and sound efficiency, considering to the climatic zone and the proximity of an airport. For this reason we resorted to a good thermal / acoustic insulation of the building with a careful choice of insulating materials in order to avoid thermal bridges. Thus, the energy characteristics of related climate zone have been tested focusing to the sunlight and the exposure of the wind. It was revised the exposures of interior spaces of the house by the presence of large windows to capture more sunlight as possible during the winter time.
It was decided, however, to give new expression to the artifact consistent with the new technologies and materials used, allowing the use of stone and wood, as well as the outline of coverage and geometries - the task of leaving a trace of preserving the past.
So the prospects are designed with large windows and the geometry plastics of the openings impute pronounced. All the windows are equipped with special shutters opening like a book, made of wooden slats that filter light into the internal space. Except the large corner windows of the study of South / East, where presents the external curtains with an electrically control. The interior area, outside of the house, will be arranged with native species tree and a series of appliances designed to improve usability. On the road there is a concrete fence and two entrances, one leads directly to the residence and the other leads to the same parking place far away from the residence.