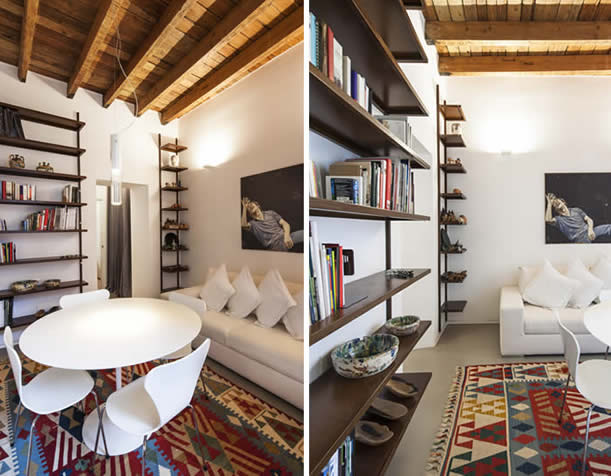 A small apartment on the Isola quartier, the new half of Milan's nightlife, with narrow streets and small squares fabric which are essential faced between The fine nineteenth and early twentieth century for the working class that was inhabited until just a few years ago. The district is just a few steps away from futuristic skyscrapers Garibaldi area, but despite the proliferation of new activities, of small restaurants, bars, jazz clubs. Isola has kept its atmosphere from the people who lived there because its urban identity has fortunately not been affected.
The changes in fact take place in interiors of old tenements, concerned old apartments where space was spartan and the comfort was a little widespread, in agreement with the lifestyle of old residents. In the second floor of a building that is overlooking to two courtyards, the apartment, very bright, is born from one restructuring space which originally consisted of two rooms and a bathroom, for a total of 40 square meters.
The plant's remained simple and essential, you could say a monastery: the entrance gives onto the living room, which gives access to a kitchenette and a furnished anteroom that serves as antechamber to the bedroom area and access to and from new bathroom, lessening the proceeds original master bedroom and converting the existing bathroom into a shower room. In the project there was no space added: thus it was chosen working in small-scale on the idea of a mini urban and metropolitan loft, totally unexpected inside the railing house: from here resin floors, the use of iron treated with corten for craft libraries to entire wall, the contemporary furnishings of good design, simple and functional lighting (Groppi). There were brought some details not imagined: the wooden floors and the original bricks of the outer walls. All the floors and some backbone bricks are kept remained as a coming sign of the past and the atmosphere of urban archeology which are not in contradiction with the spirit of the new project.