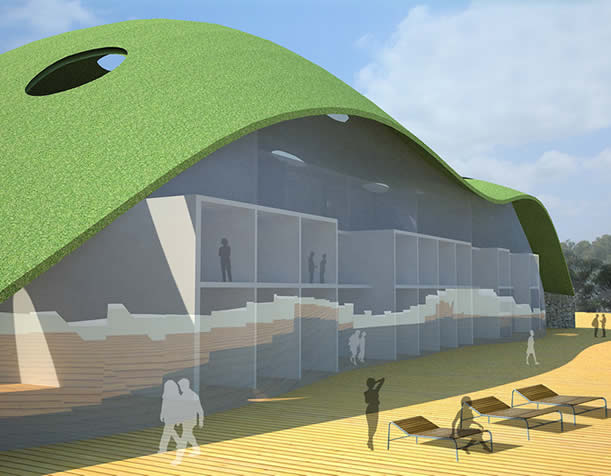 
The competition is a joint project of urban redevelopment and enhancement, environmental, architectural and landscape of the coastline of the City of Sorso, utilizing two main interventions:
Requalification of Lido Iride and realization of a park adjacent to the beach approximately 10 hectares.

LIDO
An unusual architectural structure complex that arises from the "genius loci" of the place and heal the inflicted wounds on the land. The system and the shape of the dunes is transferred into the composition of the project, with five domes of concrete, where two of them will be occupied by a Resort, one as Active Center and the other two are the car parking. The entire outer surface is covered with soil and vegetation, the layers of soil and native vegetation will be a thermal insulation to the whole structure with great benefits for energy consumption. The underground parking that would be achieved by descent (comb) No. 1 with a ramp, will be lighted and ventilated by elliptical holes placed on the skin of the covering. Instead, the Resort and the Active center for young people have two large windows (eyes) facing the sea, to capture energy (photovoltaic system), (exerting illuminating light) the interior (eyelid). In short, two large eyes (Iride) in the territory where the architecture conceived as an organic and fluid covered by a vegetation cover of native plants, (pink cardinal, catchfly, Ononis, astragalus, sea lilies, etc.) are changed color by different seasons, will be placed on the territory of the former towed by the development of the whole area.

PARK
The area of this project is quite humanized from presence of the house structures, the humanized of the place over years has also reflected on the state of the soil and flora inside the area, the vegetation formations are typical of psammofila environments, even with the constant presence of a thicket pinaster Pinus pinea, Juniperus macrocarpa and oxicoedrus phoenicea: it is a pine forest that requires a redevelopment works to consolidate the plants. The park will consist of an organic path which maintains contacts with the former lido area and the pond and the Ginepreto Platamona by trekking and bike path.

Redevelopment and infrastructure of the coastal strip.

MARINA DI SORSO
The proposed project comprises the construction of a parking area that not only solve the problem of securing for those who head to the beach or for the attendances of the square in front of it, but also improve the appearance of meeting space (and former walk skating). It is an area of approximately 1.8 acres between the former skating, the local municipal property formerly known as Kangaroo, and the intersection area between the Sorso Marina and the province road. The construction of the parking lot has assumed a work of expropriation for public uses of the area in front of a cross between Marina di Sorso and the Province Road n.81 , a subsequent operation qualification would make the accessible for over 500 machines. The rest of the work will be the creation of a large square on the sea, including important pedestrian spaces, showers, kiosks, bars and an outdoor amphitheater for musical. It aims to make the area as a point of reference for aggregation, entertainment and socialization of the residents or non. The furniture is made of wooden chairs along the square with diffuse lighting. The area above the square will be a parking place which is built to favor the aggregation of families, with children's playground, creating seamless integration with the restaurant present whose premises are owned by the municipality and the new front plaza.

DOWN TO THE SEA
The proposed concept is intended to transform the way down the sea and the related circle traffic and squares, spaces except pedestrian way, sidewalk in stone, stone pavement - trachyte Fordingbridge, equipped with several facilities as showers, kiosks, etc. .. All elements with ‘modest’ size, refer to the construction of pastoral Sardis folds, to the volume which is completely built stone, surmounted by wood and glass structures in order to dose and filter the light. Another characteristic element of the intervention on the slopes to the sea is the complete reversal of the parking system, which will be placed at the head of each comb, the intersection of each slope and the SP 81 and particularly camouflaged in green. Each circile will be placed a wind factor with limited size and of sufficient power (probably 5 kW / m) that will supply energy needs for the area, such as services, kiosks and street lighting in the same circle, which is made of light materials and technological equipment with low energy consumption. The environmental impact of the wind turbine will be almost nil, given the opportunity to paint the elements which is up with the colors that contextualized into the environment.