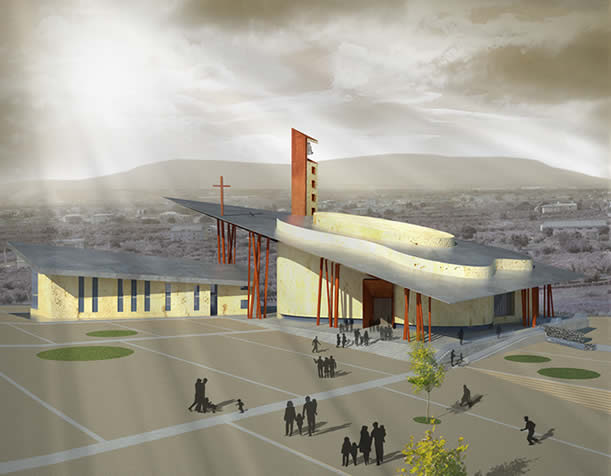 The parish of St. Benedict will rise in the city of Lamezia Terme, in an area called the "hinge" between the two centers of Sambiasee Nicastro, a place of many changes that are taking place and are planned for the future development of this area, of which the parish it would become the focus, not only religious, but also cultural, recreational, and at the same time architecture. The proposed project is part of it within the urban planning, particularly respected to the Plan "AREA API", which sees the planned development of the area through the construction of settlements building residential, commercial and office. The philosophy behind the design of the new inter-complex, which is related in a complete way with the surrounding buildings and the road structure, linking residential parts to now disconnected, enhancing the functionality of an area with a strong appeal.
The project involves the construction of two new roads connecting and crossing the entire area Municipal and diocesan. One to the east that arises as a continuation of that in the project, and allows the connection of this part of the residential area with the city; the other, in fact, that connects this road with residential buildings to the west and the way Senator Perugini, creating a cut in the lot owned by the city, which allows you to give the square a more defined and private. This, in fact, will be enclosed within a path driveway, but most will be protected from this by repositioning along the edges of the municipal buildings, making it a long and particularly scenic backdrop on 3 sides, and then open and projected towards the sky on the fourth side, thanks to the special coverage of the new Church.
From the general layout can be noted as this is fully integrated in the context, creating with it the vanishing points and connectors, or through the choice of using a fluid form that it becomes a "flower" enclosed within a plate, which follows the conformation of the area, both through the projection of these vanishing lines on the floor that draw the opening and the call to the church.
The project defines all the space that houses the parish center of St. Benedict, which relates to the large square in front as a sort of "Acropolis", lying on a ground characterized by differences in height, surrounded by buildings of poor architectural quality aiming to requalification.
All the structure that will house the real Church will take the shape of a "flower" that rests on a platform to be used as a "constructed nature", formed by tall pillars grouped in the forest of trees that support a wide and sloping roof that, as a "light coma", is projected in the wind.
Raised above the level of the square, through a large staircase and a ramp system, the building soars in the surrounding landscape, shining for its clarity and simplicity of matter, characterized by a succession of sinuous walls that run becoming higher and higher, within a point and light, capable of leaving a glimpse of the purity of the sky, to rise up to it, through the continuation of one of these elements over the cover, to give shape to the cross.
No less important is the horizontal volume in the form of a big C, located on the side of the church, as opposed to the top, consisting of the high bell tower of triangular shape, highlighted by a different use of matter, which is related to the more traditional elements and stereometric composition, such as large pillars and the entrance portal, made of a special material but taste rude, as the Corten. The structure that will be built will be built on two levels, the upper host the liturgical assembly, while the lower salon interparochial. These are two areas with very different characteristics, such as underline their access routes. The lounge serves interparochial virtually defines a foundation as smoothed the slope of the land where the church is based. It will resume the shape of the church above, albeit containing functions totally different. It will be marked by a large entrance hall, followed by a lobby / reception which will enter through three doors to the great hall, with a capacity of over 1,000 seats. The lounge is in the basement, while the part above ground is completely glazed and marked by numerous websites that will serve as emergency exits. If necessary, the space, thanks to the presence of three doors located in opposite positions and sliding walls, will be further divided into smaller rooms, each with access and separate outputs. On the floor of the hall it is located entirely devoted to the parking structure, accessible directly from the main avenue, and is in turn connected to the square above, through a wide staircase, a ramp and a lift in the bell tower.
The paths between the church and the other functional areas, such as the rectory, the local pastoral ministry and offices interparochial, will be easily accessible and useful, and in particular will be connected directly to the large plate via covered walkways. These spaces will also have separate entrances and in front of the parking spaces along the road. On the ground floor will be located the premises of the pastoral ministry, divided into classrooms and services, while the upper floor will be housed offices, for different size and services. The rectory will be developed on two levels, living and sleeping area, providing maximum comfort and the best hospitality to the parish priest and his assistants.