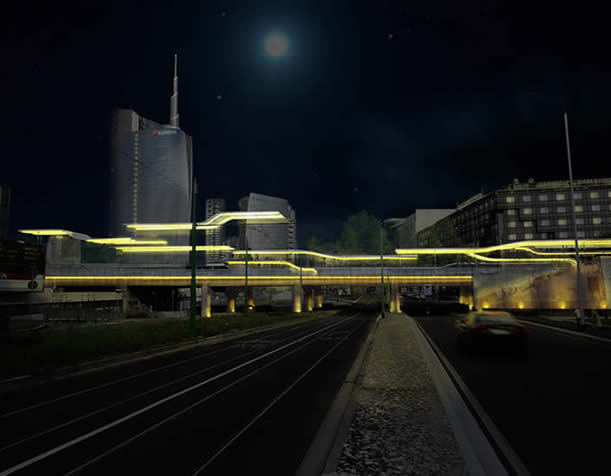 
Our idea is converting the Cavalcavia Bussa to a green elevated pathway, pedestrian and bicycle, an area slow journey which is accessed by inviting terraces formed from the north and south of the structure. In our case the green promenade will link up the flowerbed traffic island along via Sturzo, "partner" to be redesigned as a "Lombardo garden" of hornbeam where situated Velostazione and the pedestrian and cycle paths that would complete the communication system until the station of Garibaldi. It would be the first facility of its kind in Milan: green, elevated to a right height in order to allow a fresh eye on Milan and on the railroad, it’s organized to encourage the interaction among its users.
Our project seeks to circle the local history with a piece of the city in a great change. The walkway has three green crucial nodes that will encourage users to stop and spend their time: the central nexus square / playground / play area for children and, to the north and south, equidistant, two "woods" that would make memory to "Forest joy "knocked down to make way for Palazzo Lombardia.
Will be two forests with native species: all the vegetation that will be planted (by herbaceous shrubs provided in the terraces and in the new garden along the street stands, the trees of the two forests, the "rain gardens" that will filter water runoff) is species of our climate zone. In the choice you will make great attention to their progress in the seasons to compose a landscape alive in every part of the year. In a system, it was thought at the Library of Trees: the former Green knocks them constitutes a "chapter Lombard" and integrate adding areas for sport and game that there are not provided. As for the "neighbors", the Green Pepper via Pepe and kindergarten in the streets Ferrari and Don Sturzo, will be included in the new walk through the terraces North and South. A use of the nursery, there is a strip of gardens and educational , for all, a Lab-Archive of seeds, to be hosted in the municipal building adjacent to the North stairway. Taking care of the garden, along with citizens who wish to collaborate, teach children the value of food, an antidote to the waste. New Bussa is still an overpass on a busy road: the future will be to the new city gate to the transformations of the Garibaldi-Repubblica; the concrete structure will be covered with colored Corten steel, topped by glass balustrades positioned to replace existing parapets, a landmark recognizable as a transition. As for the name, we believe Overpass Bussa not go changed the name that reminds the priest of the island will pay, finally, to his work as a builder of communities: no longer a land of no one but a place to meet and socialize. The mere consumption, in our project, is a marginal aspect.