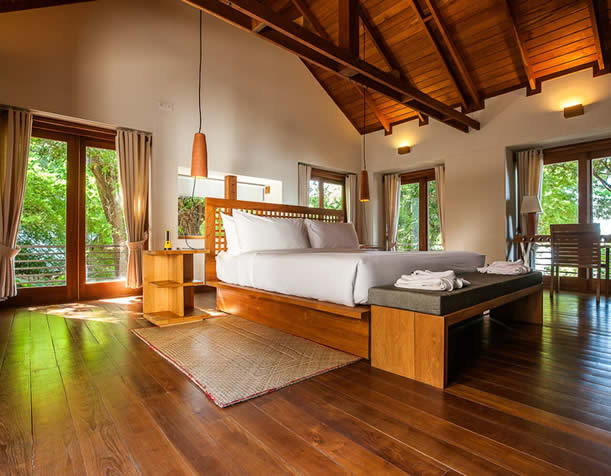 Yandabo Home is a set of bungalows designed to break for travelers who surf the Ayeyarwaddy River in the stretch Bagan-Mandalay.
We are in Myanmar, in between forests of trees and on the banks of a river that has the breadth of the sea and the middle of the main waterway of the country. In such a place, remote and unspoiled, an architect must enter on tiptoe, so I've designed a project that would define "silent" and contemporary, all developed within the limits and boundaries imposed by existing trees, an intervention that safeguards nature and leaves intact in its usual life.
The first rule is do not knock down any tree: under the foliage and around the massive trunks were built six bungalows with simple and linear. The bungalows (6 with two bedrooms and two bathrooms mirror structures entirely of wood, with a roof of bamboo) are based on a platform on stilts that connects them and winds, drawing (scaled down), streets and squares, alcoves . At ground level, a restaurant area, functional, separate from the proper residence. The inspiration comes from the nearby village nearb, a small center of skilled clay craftsmen who live and work according to ancient rhythms and live huts roofed bamboo canes intertwined. I tried to replicate the atmosphere of the village, charmed by its narrow streets, the light, the trees that are part of the fabric of streets and plazas. This is not ethnic-inspired, would rather synergy with the style of the place (bungalows), with traditional materials (teak and terracotta, echoed in the colors of the internal and external), with the skills of the workforce (with which he has worked closely on the project).
The second rule is to speak the language of our times: the bungalows are large and comfortable, with large windows that overlook the landscape in a mixture of internal and external, large and bright bathrooms. The furnishings and lightings, elegant and essential, are made on the site by materials and local craftsmen. In respect to local custom, the bed is in center of the room facing North. In the wall separating the bathroom, you have carved niches for pottery created in Yandabo: as in an art gallery or as in a temple with statues of the Buddha.
Yandabo House is made for short stays: the visitor has everything needed for a cozy and comfortable stopover, without taking a break in the journey come off by the spectacle of nature.