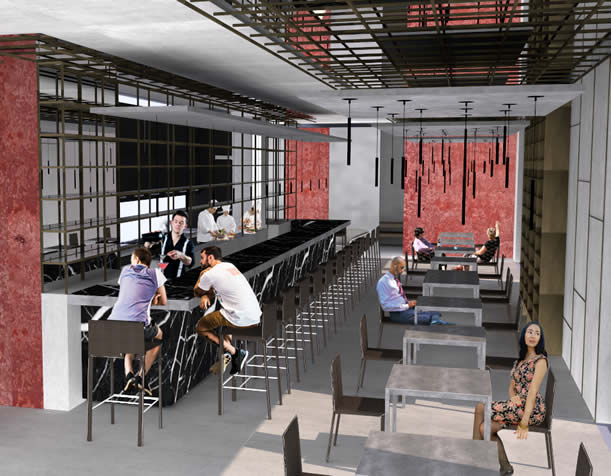 
Inspired by contemporary design taste, the Garage Restaurant is located in Yangon, the great Burmese capital.
This is a recovery of a building for commercial use with restaurant, converted by using a long and narrow free space in which to freely insert the minimal elements of the project, into a bistro.
The restaurant space is organized as a large open space, where a large black marble counter separates the dining area from a long open-view kitchen, with which it maintains a common language thanks to the complex design of shelving that make up the diaphragm between cooks and the counter.
To the grays and blacks of doors, walls, floors and furnishings, it contrasts with the red terracotta of the cutting walls, which act as backdrops to the scene.
The ceiling consists of an interesting metal frame mixed with mirrors that reflect the suspended panels on which the lamps are fixed, also suspended and hanging at different heights on the guests. An additional LED lighting system can be mounted on the metal frame making the evening lighting something unique, similar to a luminous web, which is reflected innumerable times in the mirrors above.
Therefore, a design based on transparency and interpenetration of spaces given by visual continuity, both between furnishing elements and technical elements and, above all, between the different rooms of the room.
The stylistic language of the counter and its shelves is taken up by the wine wall that is on the opposite wall, also in bronze and equipped with mirrors to increase the play of reflections that broadens the perceived space of the room.
An essential, comfortable and tasteful place, a minimal but sophisticated place that stimulates, thanks to its basic shapes, the open-view vision and the breadth of its spaces, a sense of relaxation that is the essence of conviviality in the restaurant.