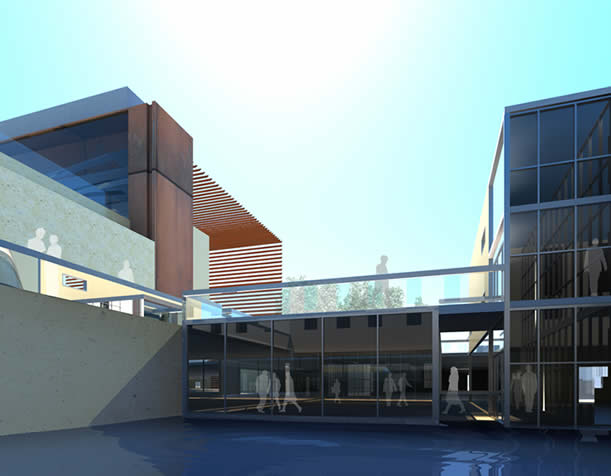 
An analysis of the urban plant of the new city Valdeluz shows a clear reference to the antique, classical “Roman” city structure. The crossing of the two green coloured axes determine 4 blocks of prevalently administrative and commercial buildings. One of these four, named “la manzana”, is the subject of this project.
The orthogonal grid of the city will be reflected inside the project giving privilege to two crossing axes (i..e. the antique roman “Cardo” and the “Decumanus”) throughout the whole construction. In order to double the public space the projects contains two floors, each with a variety of distinctive functions. The ground floor will cater for the commercial demands of the block while the first floor will favour the aspect of human, social relations.
The vivid interchange of both levels will be guarantied by large open squares on the “piastra”. These patios, paved with grey stones and covered with green lawns or big water basins contain light canals, vertical passages as slopes, stairs, elevator scales and lifts. The entire set is composed by different “pavilions” of 2 or 3 independent levels. All of these three levels dispose of a more or less private patio and have been planned in a modular way. This allows for the possibility to build them in phases: The Cultural Centre with the House for the Youth, the Municipal Library, the Ludoteca (Games), the Music and Dancing School, the Council’s Administration offices and at last, the Theatre, the very heart of the structure. The characteristic ascending seating rows of this centrally located open air Theatre will lead from the “Forum” at the centre of the square along a wall up to the vast roof terrace. From the “Belvedere”, on top of the theatre’s scenic tower, visitors may enjoy a 360° panorama of the entire city of Valdeluz and its closest neighbours (Yebes e Guadalajara). From this tower a rectangular arch made by steel and wood panels containing photovoltaic technology will filter the daylight down to the square and from the side thanks to its vertical part (here designed with ranking plants).
The filtered daylight from above will grant this open air square the perception of an interior space, whereas the light filtered from the side will make it feel as an outdoor space again. A perception, which will be strengthened throughout the whole construction by the ranking plants whose softly swinging leaves cast mobile shadows.