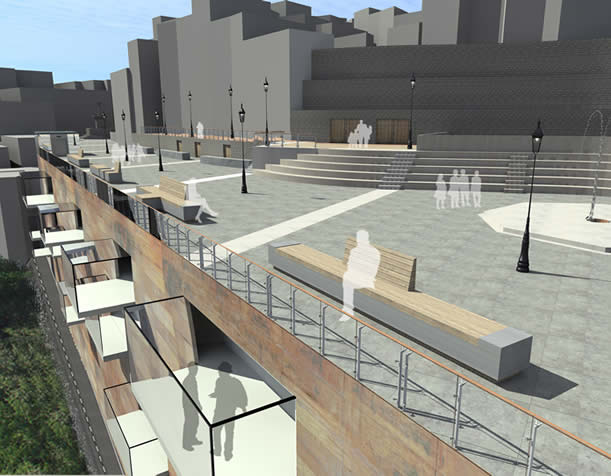 
This project, which consists of an urban, environmental and architectural requalification of the area between Via Florimo and Piazza Ammendola, right in the ancient heart of the town, is led by the desire to provide the residential area of San Giorgio Morgeto with an adequate and important ‘’Piazza’’. The ‘’Piazza’’ is a site which gives life to the entire ‘borgo’ (medieval neighbourhood) or ‘the place that never exist’. This place now becomes reality in the form of an extensive pedestrian area where social gatherings and cultural events can take place whist overlooking the vast plain of Gioia Tauro and the extraordinary sunsets behind the mountain of Sant’Elia. A few historical and demographical notes. The project will unite Piazza Ammendola with the square on top of the recent multi-storey car park (still under construction) in order to enlarge old town center. The environmental requalification of the multi storey car park consists of a new skin, a technical wall of the entire building that will have a strong ecological as well as an aesthetic contemporary impac on the medieval center around.
The Square:
In order to unite Piazza Ammendola with the upper square of the multi-story car park and transform the whole area into a pedestrian zona it was necessary to build a sport, 5 meter high tunnel and lift the lower part between the two sides, then to lengthen the roof of the top parking level so as to cover the part which today is still uncovered, The tunnel begins from the middle of Piazza Ammendola (beneath the square). It reaches down 1,5 meters below the parking level -1 and then splits up into one up-leading ramp to the entrance and proceeds towards the concave curve of the present day height of the street in front of the chemist’s shop (via Florimo). The entrance to the tunnel beneath Piazza Ammendola creates a new door to the city. This door leads to the above described lower levels of the car park and the part of the street in front of the chemist’s shop (via Florimo). A staircase on the right side gives direct access to the new pedestrian square. Level 0 on the plan shows the piazza’s project that has now been brought up to the same height of Piazza Ammendola.
On its eastern side, the area was shaped as a little ampitheatre with two flights of stairs, a smaller one with threw steps in front of the chemist’s shop (leaving the view open to the buildings lining Via Florimo) and a larger flight of stairs in front of the pre-existing stone wall of the square. At the center of these flights an octagonal basement of stone (identical in size to the same base of the fountain in Piazza Ammendola) can serve in certain periods as a fountain and in others as a small stage for open air performances. Throughout the entire summer season all flights of stairs maybe used as seats.
To its western side, Piazza Ammendola expands wide over the first part of the tunnel. In this way the new space will integrate without restrictions in width into the urban environment of the San Giorgio quarter.
At its center, on a lower portion to the North, there will be a Caf (on the level of the first ring of the old stone wall). Towards the larger flight of stairs a platform stretching over the tunnel will host coffee tables during the summer while on the Piazza’ground level of the old stone wall six crafts shops will sell loval products. The foudations of these shops will be built with steel-reinforced concrete. Except for the Piazza Ammendola’s part, the entire paving of the area will be in grey stone with white stone rays leadig from the lower center part to the upper side of the whole quarter. All new street lamps (the same models as already installed on Piazza Ammendola) will be positioned along the central long axis of the square. The upper and lower ends of this axis will be equipped with concrete seats covered by chestnut barns. These rows of seats will be lined with LED lights close to the ground. All new balusters will be made of steel and glass with wooden handrails. Evergreen wines and bougainvillea plants will cover the back of the flights of stairs along the open part of Via Florimo.
The environmental requalification of the multi storey car park
The requalification of the multi storey car park is approached from two aspects, the aesthetic and the functional one. The first is accomplished by creating a new ‘skin’ over the car park of the lower via Florimo, a kind of wall with a high environmental impact. This second skin texture was inspired by interlacing bundles of baskets (a typical handicraft product of Calabria), and were produced by flat Corten steel (rust blocked) tapes fixed onto a lightweight steel support.
The functional aspect of this ‘skin’ which extends on all three levels of the underground car park, running close to the wall with a width of about two meters and accessible from both staircases and elevators, means it can be transformed into a path that at certain times of the year can host temporary art shows or exhibit local handicraft products. At its simplest it represents a wonderful scenic path.
On its surface this path is characterized by protruding glass cases (similar to bow windows) of different sizes, which simulate the skyline of the urban fabric of San Giorgio Morgeto.
The entire outer side of the wall will be illuminated by spotlights from the base of the lower Via Florimo to create an impressive scenario at night by emphasizing it’s colour. And finally, with the new lighting of the glass cases the entire wall seen from a distance will strengthen the medieval aspect of San Giorgio as a important gateway to the protected Nature Park of Aspromonte.