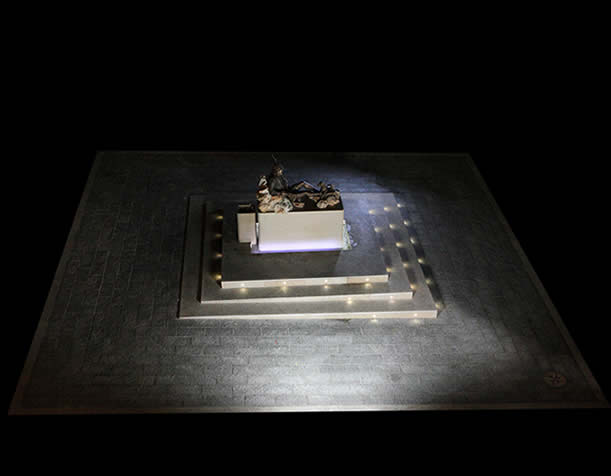 The place:
It was first thought to place the fount of Saint Rocco in the garden adjoining the church on the corner facing the square. Here the location of the monument, surrounded by greenery, would have given a more intimate aspect to the entire composition. Then, conforming to general wishes, we decided to place the monument in the city center square, in order to give more visibility to the whole work. I have called it SQUARE, but as you can see and as many people know, a crossroads and a parking space for a few cars cannot be considered a square. After receiving an invitation from Prometeus Association and particularly Saverio Petitto, I did a preliminary study on this area, trying to give character and presence to a future proper square, leaving the vehicular access in San Rocco street and Oberdan street intact. The square is developed situating on the opposite side of the church, in the corner between two private buildings. It’s almost a square and all of the concentric square paving stones(granite) are at the same quote of the two roads, with no steps, and thus, without handicap separated access. The only element a certain importance is the presence on both two sides of 15 Trani marble blocks 50*50*cm with LED lights at the bottom part of each cube which can also be used as seats; these elemets will also provide a barrier to vehicular traffic. The essential simplicity would give proper emphasis to the work of art by the sculptor Carnevali.
The base:
The base, which I designed with regard to the artist, has a square form (6*6m) and it is modular 1*1, the whole base is positioned at the center of the diagonals of the space that I described above and it’s at the center of mass of the façade of the church San Rocco. The composition, surrounded by steps, has a hollow plinth in the center, measuring 2*1m with a height of 1m, in which will be placed the rock and the statue of San Rocco. A cubic form containing the bronze fountain created by the artist will be placed on the narrower side. All the elements of the base are in Trani stone, which has been hammered with a coarse and fine-tipped scalpel. The water that flows from the rock symbolically represents the fount, and this ‘fount’ fills the upper part of the solid, then transfers the water along the sides of the plinth and collects it in a drain along the perimeter of the settlement where there is the sculpture. This drain is dug out as a groove on the square base, and contains all of the LED’s that illuminate the box and the artistic composition.